Now Here Is Story of a Famous Team 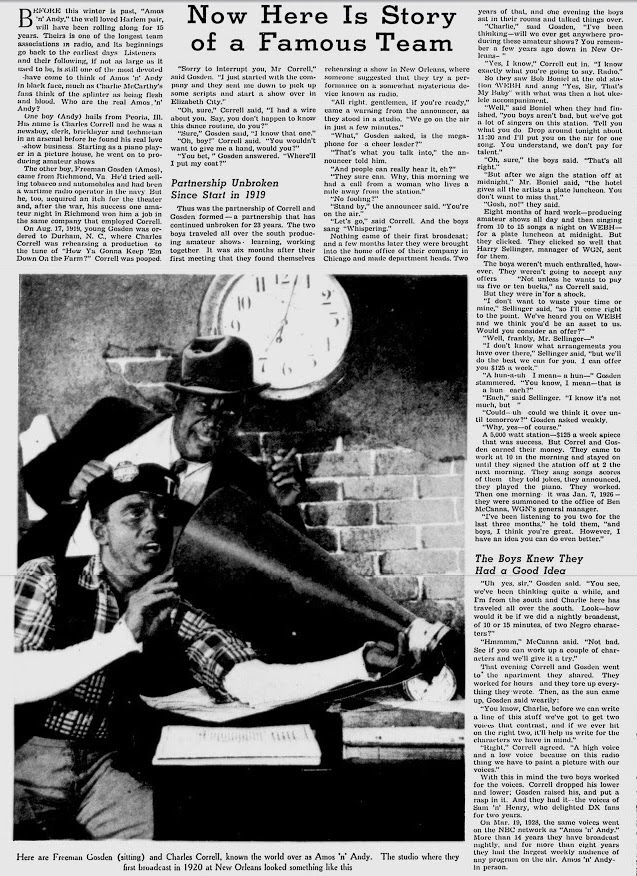 Now Here Is Story of a Famous Team

BEFORE this winter is past, “Amos ‘n’Andy,” the well loved Harlem pair, will have been rolling along for 15 years. Theirs is one of the longest team associations in radio, and its beginnings go back to the earliest days. Listeners and their following, if not as large as it used to be, is still one of the most devoted have come to think of Amos ‘n’ Andy in black face, much as Charlie McCarthy’s fans think of the splinter as being flesh and blood. Who are the real Amos ‘n’ Andy?
One boy (Andy) hails from Peoria, Ill. His name is Charles Correll and he was a newsboy, clerk, bricklayer and technician in an arsenal before he found his real love-show business. Starting as a piano player in a picture house, he went on to producing amateur shows.
The other boy, Freeman Gosden (Amos), came from Richmond, Va. He’d tried selling tobacco and automobiles and had been a wartime radio operator in the navy. But he, too, acquired an itch for the theater and, after the war, his success one amateur night in Richmond won him a job in the same company that employed Correll.
On Aug. 17, 1919, young Gosden was ordered to Durham, N. C., where Charles Correll was rehearsing a production to the tune of “How Ya Gonna Keep ‘Em Down On the Farm?” Correl was pooped.
“Sorry to interrupt you, Mr. Correll,” said Gosden. “I just started with the company and they sent me down to pick up some scripts and start a show over in Elizabeth City.”
“Oh, sure,” Correll said, “I had a wire about you. Say, you don’t happen to know this dance routine, do you?”
“Sure,” Gosden said, “I know that one.” “Oh, boy!” Correll said. “You wouldn’t want to give me a hand, would you?”
“You bet,” Gosden answered. “Where’ll I put my coat?”

Partnership Unbroken Since Start in 1919
Thus was the partnership of Correll and Gosden formed—a partnership that has continued unbroken for 23 years. The two boys traveled all over the south producing amateur shows, learning, working together. It was six months after their first meeting that they found themselves rehearsing a show in New Orleans, where someone suggested that they try a performance on a somewhat mysterious device known as radio.
“All right, gentlemen, if you’re ready,” came a warning from the announcer, as they stood in a studio. “We go on the air in just a few minutes.”
“What,” Gosden asked, is the megaphone for a cheer leader?”
“That’s what you talk into,” the announcer told him.”
“And people can really hear it, eh?”
“They sure can. Why, this morning we had a call from a woman who lives a mile away from the situation.”
“No fooling?”
“Stand by,” the announcer said. “You’re on the air.”
“Let’s go,” said Correll. And the boys sang “Whispering.”
Nothing came of their first broadcast; and a few months later they were brought into the home office of their company in Chicago and made department heads. Two years of that, and one evening the boys sat in their rooms and talked things over.
“Charlie,” said Gosden, “I’ve been thinking—will we ever get anywhere producing these amateur shows? You remember a few years ago down in New Orleans-“
“Yes, I know,” Correll cut in. “I know exactly what you’re going to say. Radio.”
So they saw Bob Boniel at the old station WEBH and sang “Yes, Sir, That’s My Baby” with what was then a hot ukulele accompaniment.
“Well,” said Boniel when they had finished, “you boys aren’t bad, but we’ve got a lot of singers on this station. Tell you what you do. Drop around tonight about 11:30 and I’ll put you on the air for one song. You understand, we don’t pay for talent.”
“Oh, sure,” the boys said. “That’s all right.”
“But after we sign the station off at midnight.” Mr. Boniel said, “the hotel gives all the artists a plate luncheon. You don’t want to miss that.”
“Gosh, no!” they said.
Eight months of hard work—producing amateur show all day and then singing from 10 to 15 songs a night on WEBH—for a plate luncheon at midnight. But they clicked. They clicked so well that Harry Sellinger, manager of WGN, sent for them.
The boys weren’t much enthralled, however. They weren’t going to accept any offers “Not unless he wants to pay us five or ten bucks,” as Correll said.
But they were in for a shock.
“I don’t want to waste your time or mine,” Sellinger said , “so I’ll come right to the point. We’ve heard you on WEBH and we think you’d be an asset to us. Would you consider an offer?”
“Well, frankly, Mr. Sellinger— ”
“I don’t know what arrangements you have over there,” Sellinger said, “but we’ll do the best we can for you. I can offer you $125 a week.”
“A hun-a-uh I mean—a hun—”Gosden stammered. “You know, I mean—that is a hun each?”
“Each,” said Sellinger. “I know it’s not much, but”
“Could-uh could we think it over it over until tomorrow?” Gosden asked weakly.
“Why, yes—of course”
A 5,000 watt station--$125 a week apiece that was success. But Correl and Gosden earned their money. They came to work at 10 in the morning and stayed on until they signed the station off at 2 the next morning. They sang songs scores of them                                                                     they told jokes, they announced, they played the piano. They worked. Then one morning, it was Jan. 7, 1926—they were summoned to the office of Ben McCanna, WGN’s general manager.
“I ‘ve been listening to you two for the last three months,” he told them, “and boys, I think you’re great. However, I have an idea you can do even better.”

The Boys Knew They Had a Good Idea
“Uh yes, sir” Gosden said. “You see, we’ve been thinking quite a while, and I’m from the south and Charlie here has traveled all over the south. Look –how would it be if we did a nightly broadcast, of 10 or 15 minutes, of two Negro characters?”
“Hmmmm,” McCanna said. “Not bad. See if you can work up a couple of characters and we’ll give it a try.”
That evening Correll and Gosden went to the apartment they shared. They worked for hours and they tore up everything they wrote. Then, as the sun came up, Gosden said wearily:
“You know, Charlie, before we can write a line of this stuff we’ve got to get two voices that contrast, and if we ever hit on the right two, it’ll help us write for the characters we have in mind.”
“Right.” Correll agreed. “A high voice and a low voice because on this radio thing we have to paint a picture with our voices.”
With this in mind the two boys worked for the voices. Correll dropped his lower and lower; Gosden raised his, and put a rasp in it. And they had it—the voices of Sam ‘n’ Henry, who delighted DX fans for two years.
On Mar. 19, 1928, the same voices went on the NBC network as “Amos ‘n’ Andy.” More than 14 years they have broadcast nightly, and for more than eight years they had the largest weekly audience of any program on the air. Amos ‘n’ Andy in person.

<Here are Freeman Gosden (sitting) and Charles Correll, known the world over as Amos ‘n’ Andy. The studio where they first broadcast in 1920 at New Orleans looked something like this>