The D. A.’s a Stickler for Accuracy 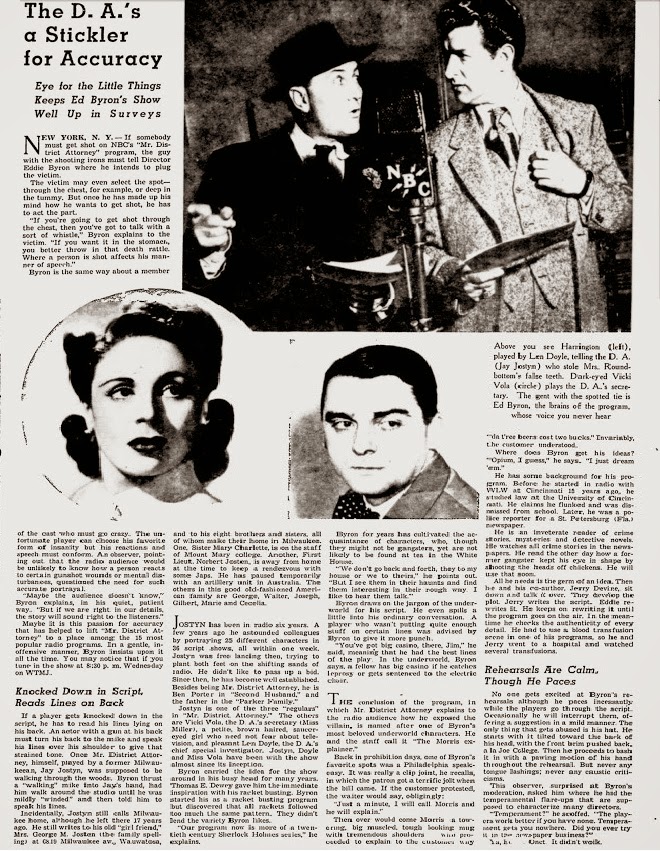 The D. A.’s a Stickler for Accuracy

Eye for the Little Things Keeps Ed Byron’s Show Well Up in Surveys
NEW YORK, N. Y. –If somebody must get shot on NBC’s “Mr. District Attorney” program, the guy with the shooting irons must tell Director Eddie Byron where he intends to plug the victim.
The victim may even select the spot—through the chest, for example, or deep in the tummy. But once he has made up his mind how he wants to get shot, he has to act the part.
“If you’re going to get shot through the chest, then you’ve got to talk with a sort of whistle,” Byron explains to the victim. “If you want it in the stomach, you better throw in that death rattle. Where a person is shot affects his manner of speech.”
Byron is the same way about a member of the cast who must go crazy. The unfortunate player can choose his favorite form of insanity but his reactions and speech must conform. An observer, pointing out that the radio audience would be unlikely to know how a person reacts to certain gunshot wounds or mental dis-accurate portrayal.
“Maybe the audience doesn’t know,” Byron explains, in his quiet, patient way. “But if we are right in our details, the story will sound right to the listeners.”
Maybe it is this passion for accuracy that has helped to lift “Mr. District Attorney” to a place among the 15 most popular radio programs. In a gentle, inoffensive manner, Byron insists upon it all the time in the show at 8:30 p. m. Wednesday on WTMJ.

Knocked Down in Script, Reads Lines on Back
If a player gets knocked down in the script, he has to read his lines lying on his back. An actor with a gun at his back must turn his back to the mike and speak his lines over his shoulder to give that strained tone. Once Mr. District Attorney, himself, played by a former Milwaukeean, Jay Jostyn, was supposed to be walking through the woods. Byron thrust a “walking around the studio until he was mildly “winded” and then told him to speak his lines.
Incidentally, Jostyn still calls Milwaukee home, although he left there 17 years agp. He still writes to his old “girl friend,” Mrs. George M. Josten (the family spelling) at G819 Milwaukee av., Wauwatosa, and to his eight brothers and sister, all of whom make their home in Milwaukee. One, Sister Mary Charlette, is one the staff of Mount Mary college. Another, First Lieut. Norbert  Josten, is away from home at the time to keep a rendezvous with some Japs. He has paused temporarily with an artillery unit in Australia. The others in this good old-fashioned American family are George, Walter, Joseph, Gilbert, Marie and Cecelia.
JOSTYN has been in radio six years. A few year ago he astound colleagues by portraying 25 different characters in 36 script shows, all within one week. Jostyn was free lancing then, trying to plant both feet on the shifting sands of radio. He didn’t like to pass up a bid. Since then, he has become well established. Besides being Mr.District Attorney, he is Ben Porter in “Second Husband,” and the father in the “Parker Family.”
Jostyn is one of the three “regulars” in “Mr. District Attorney.” The others are Viki Vola, the D. A.’s secretary (Miss Miller), a petite, brown haired, saucer-eyed girl who need not fear about television, and pleasant Len Doyle, the D. A.’s chief special investigator. Jostyn , Doyle and Miss Vola have been with the show almost since its inception.
Byron carried the idea for the show around in his busy head for many years. Thomas E. Dewey gave him the immediate inspiration with his racket busting. Byron started his as a racket busting program but discovered that all rackets followed too much the same pattern. They didn’t lend the variety Byron likes.
“Our program now is more of a twentieth century Sherlock Holmes series,” he explains.
Byron for years has cultivated the acquaintance of characters, who, though they might not be gangsters, yet are not likely to be found at tea in the White House.
“We don’t go back and forth, they to my house or we to theirs,” he points out. “But I see them in their haunts and find them interesting in their rough way. I like to hear them talk.”
Byron draws on the jargon of the underworld for his script. He even spills a little into his ordinary conversation. A player who wasn’t putting quite enough stuff on certain lines was advised by Byron to give it more punch.
“You’ve got big casino, there, Jim,” he said, meaning that he had the best lines of the play. In the underworld, Byron says, a fellow has big casino if he catches leprosy or gets sentenced to the electric chair.
THE conclusion of the program, in which Mr. District Attorney explains to the radio audience how he exposed the villain, is named after one of Byron’s most beloved underworld characters. He and the staff call it “The Morris explainer.”
Back in prohibition days, one of Byron’s favorite spots was a Philadelphia speakeasy. It was really a clip joint, he recalls, in which the patron got a terrific jolt when the bill came. If the customer protested, the waiter would say, obligingly:
“Just a minute, I will call Morris and he will explain.”
Then over would come Morris a towering, big muscled, tough looking mug with tremendous shoulders who proceeded to explain to the customer why
“da t’ree beers cost two bucks.” Invariably, the customer understood.
Where does Byron get his idea?
“Opium, I guess,” he says. “I just dream ’em.”
He has some background for his program. Before he started in radio with WLW at Cincinnati 15 years ago, he studied law at the University of Cincinnati. He claims he flunked and was dismissed from school. Later, he was a police reporter for a St. Petersburg (Fla.) newspaper.
He is an inveterate reader of crime stories, mysteries and detective novels. He watches all crime stories in the newspapers. He read the other day how a former gangster kept his eye in shape by shooting the heads off chickens. He will use that soon.
All he needs is the germ of an idea. Then he and his co-author, Jerry Devine, sit down and talk it over. They develop the plot. Jerry writes the script. Eddie rewrites it. He keeps on rewriting it until the program goes on the air. In the meantime he checks the authenticity of every detail. He had to use a blood transfusion scene in one of his programs, so he and Jerry went to a hospital and watched several transfusions.

Rehearsals Are Calm, Though He Paces
No one gets excited at Byron’s rehearsals although he paces incessantly while the players go through the script. Occasionally he will interrupt them, offering a suggestion in a mild manner. The only thing that gets abused is his hat. He starts with it tilted toward the back of his head, with the front brim pushed back, a la Joe College. Then he proceeds to bash it in with a pawing motion of his hand throughout the rehearsal. But never any tongue lashings; never any caustic criticisms.
This observer, surprised at Byron’s moderation, asked him where he hid the temperamental flare-ups that are supposed to characterize many directors.
“Temperament?” he scoffed. “The players work better if you have none. Temperament gets you nowhere. Did you ever try it in the newspaper business?”
Ya, Ec                         Onet. It didn’t woik.

<Above you see Harringion (left), played by Len Doyle, telling the D. A. (Jay Jostyn) who stole Mrs. Round-bottom’s false teeth. Dark-eyed Vicki Vola (circle) plays the D. A.’s secretary. The gent with the spotted tie is Ed Byron, the brains of the program, whose voice you never hear>