Who is Dis Guy Archie, Anyway? 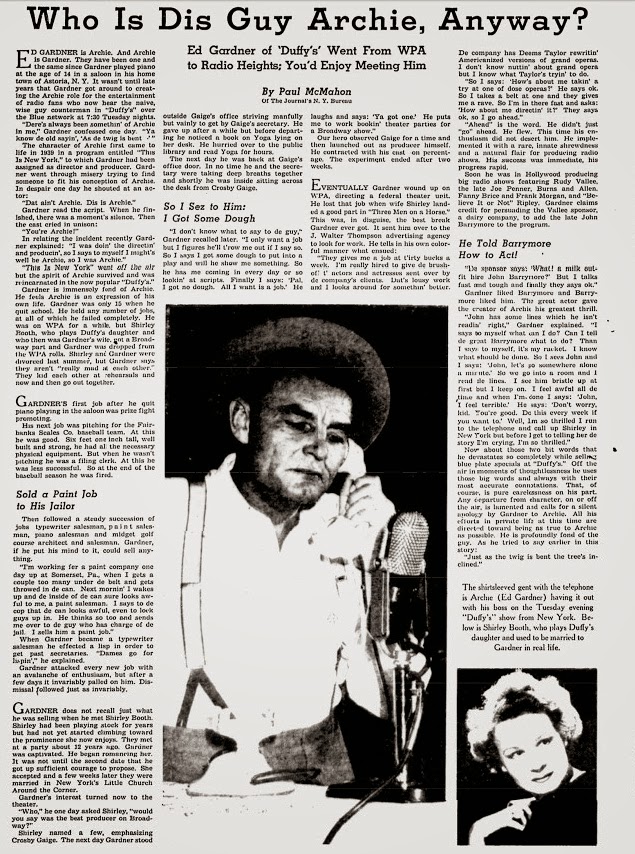 Who is Dis Guy Archie, Anyway?

Ed Gardner of ‘Duffy’s’ Went From WPA to Radio Heights; You’d Enjoy Meeting Him
By Paul McMahon
Of The Journal’s N. Y. Bureau

ED GARDNER is Archie. And Archie is Gardner. They have been one and the same since Gardner played piano at the age of 14 in a saloon in his home town of Astoria, N. Y. It wasn’t until late years that Gardner got around to creating the Archie role for the entertainment of radio fans who now hear the naive, wise guy counterman in “Duffy’s” over the Blue network at 7:30 Tuesday nights.
“Dere’s always been somethin’ of Archie in me,” Gardner confessed one day. “Ya know de old sayin’, ‘As de twing is bent.’”
The character of Archie first came to life in 1939 in a program entitled “This Is New York,” to which Gardner had been assigned as director and producer. Gardner went through misery trying to find someone to fit his conception of Archie. In despair one day he shouted at an actor:
“Dat ain’t Archie. Dis is Archie.”
Gardner read the script. When he finished, there was a moment’s silence. Then the cast cried in unison:
“You’re Archie!”
In relating the incident recently Gardner explained: “I was doin’ the directin’ and producin’, so I says to myself I might’s well be Archie, so I was Archie.”
“This Is New York” went off the air but the spirit of Archie survived and was reincarnated in the now popular “Duffy’s.”
Gardner is immensely fond of Archie. He feels Archie is an expression of his own life. Gardner was only 15 when he quit school. He held any number of jobs, at all of which he failed completely. He was on WPA for a while, but Shirley Booth, who plays Duffy’s daughter and who then was Gardner’s wife, got a Broadway part Gardner was dropped from the WPA rolls. Shirley and Gardner were divoreed last summer, but Gardner says they aren’t “really mad at each other.” They kid each other at rehearsals and now and then go out together.
GARDNER’S first job after he quit piano playing in the saloon was prize fight promoting.
His next job was pitching for the Fairbanks Scales Co. baseball team. At this be was good. Six feet one inch tall, well built and strong, he had all the necessary physical equipment. But when he wasn’t pitching he was a filing clerk. At this he was less successful. So at the end of the baseball season he was fired.

Sold a Paint Jon to His Jailor
Then followed a steady succession of jobs typewriter salesman, paint salesman, piano salesman and midget golf course architect and salesman. Gardner, if he put his mind to it, could sell anything.
“I’m working fer a paint company one day up at Somerset, Pa., when I gets a couple too many under de belt and gets throwed in de can. Next mornin’ I wakes up and de inside of de can sure looks awful to me, a paint salesman. I says to de cop that de guy who has charge of de jail. I sells him a paint job.”
When Gardner became a typewriter salesman he effected a lisp in order to get past secretaries. “Dames go for lispin’,” he explained.
Gardner attacked every new job with an avalanche of enthusiasm, but after a few days it invariably palled on him. Dismissal followed just as invariably.
GARDNER does not recall just what he was selling when he met Shirley Booth. Shirley had been playing stock for years but had not yet started climbing toward the prominence she now enjoys. They met at a party about 12 years ago. Gardner was captivated. He began romancing her. It was not until the second date that that he got up sufficient courage to propose. She accepted and a few weeks later they were married in New York’s Little Church Around the Corner.
Gardner’s interest turned now to the theater.
“Who,” he one day asked Shirley, “would you say was the best producer on Broadway?”
Shirley named a few, emphasizing Crosby Gaige. The next day Gardner stood outside Gaige’s office striving manfully but vainly to get by Gaige’s secretary. He gave up after a while but before departing he noticed a book on Yoga laying on her desk. He hurried over to the public library and read Yoga for hours.
The next day he was back at Gaige’s office door. In no time he and the secretary were taking deep breaths together and shortly he was inside sitting across the desk from Crosby Gaige.

So I Sez to Him: I Got Some Dough
“I don’t know what to say to de guy,” Gardner recalled later. “I only want a job but I figures he’ll t’row me out if I say so. So I says got some dough to put into a play and will he show me something. So he has me coming in every day or so lookin’ at scripts. Finally I says: ‘Pal, I got no dough. All I want is a job.’ He laughs and says: ‘Ya got one.’ He puts me to work bookin’ theater parties for a Broadway show.”
Our hero observed Gaige for a time and then launched out as producer himself. He contracted with his cast on percentage. The experiment ended after two weeks.
EVENTUALLY Gardner wound up on WPA, directing a fedral theater unit. He lost that job when wife Shirley landed a good part in “Three Men on a Horse.” This was, in disguise, the best break Gardner ever got. It sent him over to the J. Walter Thompson advertising agency to look for work what ensued:
“They gives me a job at t’irty bucks a week. I’m really hired to give de brush off t’ actors and actresses sent over by de company’s clients. Dat’s lousy work and I looks around for somethin’ better.
De company has Deems Taylor rewritin’ Americanized versions of grand operas. I don’t know nuttin’ about grand opera but I know what Taylor’s tryin’ to do.
“So I says: ‘How’s about me takin’ a try at one of dose operas?’ He says ok. So I takes a belt at one and they gives me a rave. So I’m in there fast and asks: ‘How about me directin’ it?’ They says ok, so I go ahead.”
“Ahead” is the word. He didn’t just “go” ahead. He flew. This time his enthusiasm did not desert him. He implemented it with a rare, innate shrewdness and a natural flair for producing radio shows. His success was immediate, his progress rapid.
Soon he was in Hollywood producing big radio show featuring Rudy Vallee, the late Joe Penner, Burns and Allen. Fanny Brice and Frank Morgan, and “Believe It or Not” Ripley. Gardner claims credit for persuading the Vallee sponsor, a diary company, to add the late JohnBarrymore to the program.

He Told Barrymore How To Act!
“De sponsor says: ‘What! A milk outfit hire John Barrymore?’ But I talks fast and tough and finally they says ok.”
Gardner liked him. The great actor gave the creator of Archie his greatest thrill.
“John has some lines which he isn’t readin’ right,” Gardner explained. “I says to myself what can I do? Can I tell de great Barrymore what to do? Than I says to myself, it’s my racket. I know what should be done. So I sees John and I says: ‘John, let’s go somewhere alone a minute.’ So we go into a room and I read de lines. I see him bristle up at first but I keep on. I feel awful all de time and when I’m done I says: ‘John, I feel terrible.’ He says: ‘Don’t worry, kid. You’re good. Do this every week if you want to.’ Well, I’m so thrilled I run to the telephone and call up Shirley in New York but before I get to telling her de story I’m crying, I’m so thrilled.”
Now about those two bit words that he devastates so completely while selling blue plate specials at “Duffy’s.” off the air in moments of thoughtlessness he uses those big words and always with their most accurate connotations. That, of course, is pure carelessness on his part. Any departure from character, on or off the air, is lamented and calls for a silent apology by Gardner to Archie. All his efforts in private life at this time are directed toward being as true to Archie as possible. He is profoundly fond of the guy. As he tried to say earlier in this story:
“Just as the twig is bent the tree’s inclined.”

<The shirtsleeved gent with the telephone is Archie (Ed Gardner) having it out with his boss on the Tuesday evening “Duffy’s” show from New York. Below is Shirley Boath, who plays Duffy’s daughter and used to be married to Gardner in real life.>