Now Here’s Inside of ‘Info’ 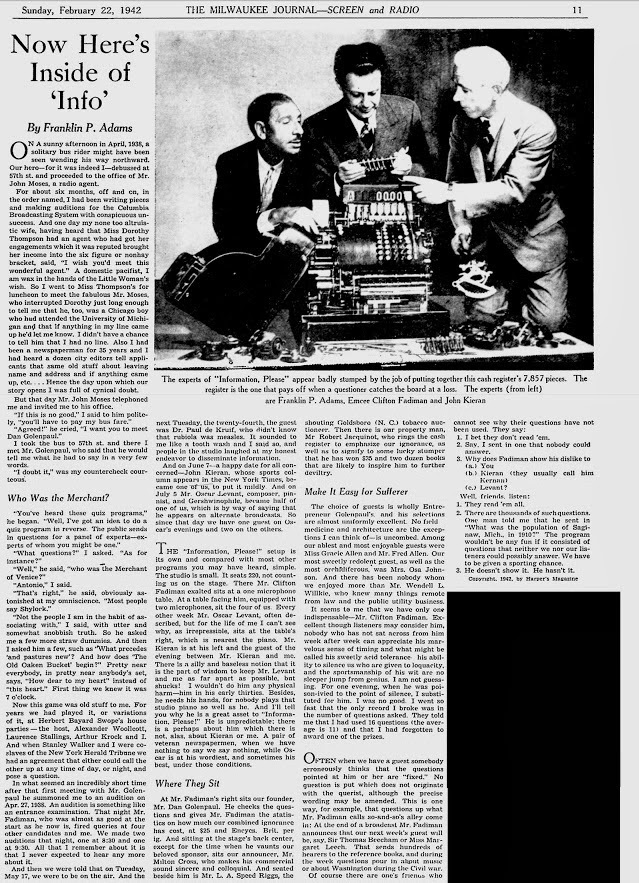 Now Here’s Inside of ‘Info’

ON A sunny afternoon in April, 1938, a solitary bus rider might have been seen wending his way northward. Our hero—for it was indeed i—debussed at 57th st. and proceeded to the office of Mr. John Moses, a radio agent.
For about six months, off and on, in the order named, I had been writing pieces and making auditions for the Columbia Broadcasting System with conspicuous un-success. And one day my none too altruistic wife, having heard that Miss Dorothy Thompson had an agent who had got her engagements which it was reputed brought her income into the six figure or nonhay bracket, said, “I wish you’d meet this wonderful agent.” A domestic pacifist, I am wax in the hands of the Little Woman’s wish. So I went to Miss Thompson’s for luncheon to meet the fabulous Mr. Moses, who interrupted Dorothy just long enough to tell me that he, too, was a Chicago boy who had attended the University of Michigan and that if anything in my line came up he’d let me know. I didn’t have a chance to tell him that I had no line. Also I had been a newspaperman for 35 years and I had heard a dozen city editors tell applicants that same old stuff about leaving name and address and if anything came up, etc. … Hence the day upon which our story opens I was full of cynical doubt.
But that day Mr. John Moses telephoned me and invited me to his office.
“If this is no good,” I said to him politely, “you’ll have to pay my bus fare.”
“Agreed!” he cried, “I want you to meet Dan Golenpaul.”
I took the bus to 57th st. and there I met Mr. Golenpaul, who said that he would tell me what he had to say in a very few words.
“I doubt it,” was my countercheck courteous.

Who Was the Merchant?
“You’ve heard these quiz programs,” he began. “Well, I’ve got an idea to do a quiz program in reverse. The public sends in questions for a panel of experts—experts of whom you might be one.”
“What question?” I asked. “As for instance?”
“Well,” he said, “who was the Merchant of Venice?”
“Antonio,” I said.
“That’s right,” he said, obviously astonished at my omniscience. “Most people say Shylock.”
“Not the people I am in the habit of associating with,” I said, with utter and somewhat snobbish truth. So he asked me a few more straw dummies. And then I asked him a few, such as “What precedes ‘and pastures new’? And how does ‘The Old Oaken Bucket’ begin?” Pretty near everybody, in pretty near anybody’s set, says, “How dear to my heart” instead of “this heart.” First thing we knew it was 7 o’clock.
Now this game was old stuff to me. For years we had played it, or variations of it, at Herbert Bayard Swope’s house parties—the host, Alexander Woollcott, Laurence Stallings, Arthur Krock and I. And when Stanley Walker and I were coslaves of the New York Herald Tribune we had an agreement that either could call the other up at any time of day, or night, and pose a question.
In what seemed an incredibly short time after that first meeting with Mr. Golen-paul he summoned me to an audition on Apr.27, 1938. An audition is something like an entrance examination. That night Mr. Fadiman, who was almost as good at the start as he now is, fired queries at four other candidates and me. We made two auditions that night, one at 8:30 and one at 9:30. All that I remember about it is that I never expected to hear any more about it.
And then we were told that on Tuesday, May 17, we were to be on the air. And the next Tuesday, the twenty-fourth, the guest was Dr. Paul de Kruif, who didn’t know that rubiola was measles. It sounded to me like a tooth wash and I said so, and people in the studio laughed at my honest endeavor to disseminate information.
And on June 7—a happy date for all concerned—John Kieran, whose sports column appears in the New York Times, became one of us, to put it mildly. And on July 5 Mr. Oscar Levant, composer, pianist, and Gershwinophile, became half of one of us, which is by way of saying that he appears on alternate broadcasts. So since that day we have one guest on Oscar’s evenings and two on the others.
THE “Information, Please!” setup is its own and compared with most other programs you may have heard, simple. The studio is small. It seats 220, not counting us on the stage. There Mr. Clifton Fadiman exalted sits at a one microphone table. At a table facing him, equipped with two microphones, sit the four of us. Every other week Mr. Oscar Levant, often described, but for the life of me I can’t see why, as irrepressible, sits at the table’s right, which is nearest the piano. Mr. Kieran is at his left and the guest of the evening between Mr. Kieran and me. There is a silly and baseless notion that it is the part of wisdom to keep Mr. Levant and me as far apart as possible, but shucks! I wouldn’t do him any physical harm—him in his early thirties. Besides, he needs his hands, for nobody plays that studio piano so well as he. And I’ll tell you why he is a great asset to “Information. Please!” He is unpredictable; there is a perhaps about him which there is not, alas, about Kieran or me. A pair of veteran newspapermen, when we have nothing to say we say nothing, while Oscar is at his wordiest, and sometimes his best, under those conditions.

Where They Sit
At Mr. Fadiman’s right sits our founder, Mr. Dan Golenpaul. He checks the questions and gives Mr. Fadiman the statistics on how much our combined ignorance has cost, at $25 and Encycs. Brit. perig. And sitting at the stage’s back center, except for the time when he vaunts our beloved sponsor, sits our announcer, Mr. Milton Cross, who makes his commercial sound sincere and colloquial. And seated beside him is Mr. L. A. Speed Riggs, the shouting Goldsboro (N. C.) tobacco auctioneer. Then there is our property man, Mr. Robert Jacquinot, who rings the cash register to emphasize our ignorance, as well as to signify to some lucky stumper that he has won $35 and two dozen books that are likely to inspire him to further deviltry.

Make It Easy for Sufferer
The choice of guests is wholly Entrepreneur Golenpaul’s and his selections are almost uniformly excellent. No field medicine and architecture are the exceptions I can think of—is uncombed. Among our ablest and most enjoyable guests were Miss Gracie Allen and Mr. Fred Allen. Our most sweetly redolent guest, as well as the most orchidiferous, was Mrs. Osa Johnson. And there has been nobody whom we enjoyed more than Mr. Wendell L. Willkie, who knew many things remote from law and the public utility business.
It seems to me that we have only one indispensable—Mr. Clifton Fadiman. Excellent though listeners may consider him week after week can appreciate his marvelous sense of timing and what might be called his sweetly acid tolerance his ability to silence us who are given to loquacity, and the sportsmanship of his wit are no sleeper jump from genius. I am not guessing. For one evening, when he was poison-ivied to the point of silence, I substituted for him. I was no good. I went so fast that the only record I broke was in the number of questions asked. They told me that I had used 16 questions ( the average is 11) and that I had forgotten to award one of the prizes.
OFTEN when we have a guest somebody erroneously thinks that the questions pointed at him or her are “fixed.” No question is put which does not originate with the querist, although the precise wording may be amended. This is one way, for example, that questions up what Mr. Fadiman calls so-and-so’s alley come in: At the end of a broadcast Mr. Fadiman announces that our next week’s guest will be, say, Sir Thomas Beecham or Miss Margaret Leech. That sends hundreds of hearers to the reference books, and during the week questions pour in about music or about Washington during the Civil war.
Of course there are one’s friends who cannot see why their questions have not been used. They say:
1.        I bet they don’t read ‘em.
2.       Say, I sent in one that nobody could answer.
3.    Why does  Fadiman show his dislike to
(a.)  You
(b.) Kieran (they usually call him Kernan)
(c.)  Levant?
Well, friends, listen:
1.       They read ‘em all.
2.       There are thousands of such questions.
One man told me that he sent in “What was the population of Saginaw, Mich., in 1910?” The program wouldn’t be any fun if it consisted of questions that neither we nor our listeners could possibly answer. We have to be given a sporting chance.
3.       He doesn’t show it. He hasn’t it.
Copyright. 1942. by Harper’s Magazine

<The experts of “Information, Please” appear badly stumped by the job of putting together this cash register’s 7,857 pieces. The register is the one that pays off when a questioner catches the board at a loss. The experts (from left) are Franklin P. Adams, Emcee Clifton Fadiman and John Kieran>