Is Sinatra the Next Bing Crosby? 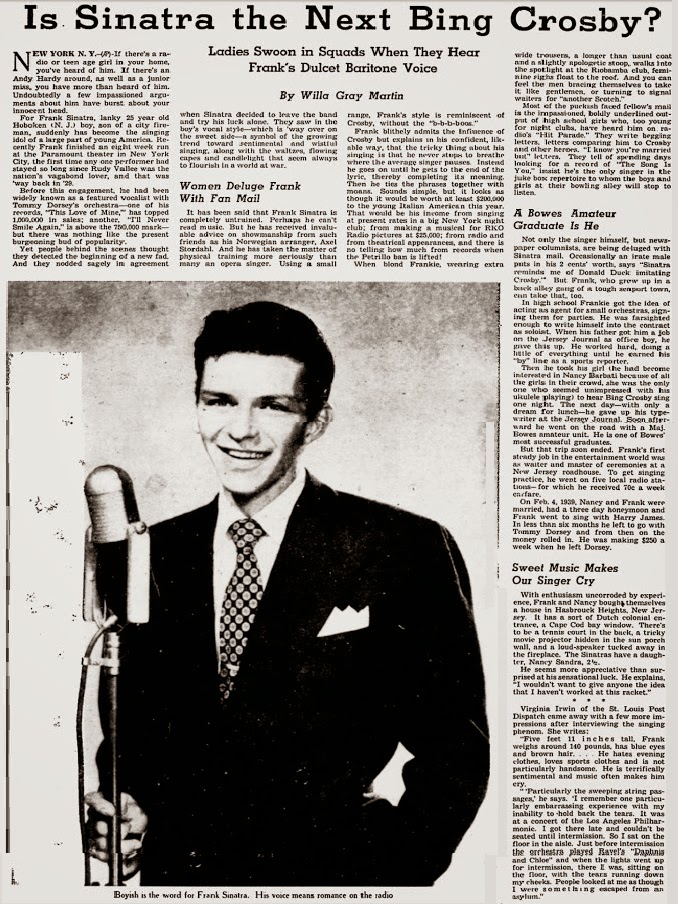 Is Sinatra the Next Bing Crosby?

NEW YORK N. Y.-(AP)- If there’s a radio or teen age girl in your home you’ve heard of him. If there’s an Andy Hardy around, as well as a junior miss, you have more than heard of him. Undoubtedly a few impassioned arguments about him have burst about your innocent head.
For Frank Sinatra, lanky 25 year old Hoboken (N. J.) boy, son of a city fireman, suddenly has become the singing idol of a large part of young America. Recently Frank finished an eight week run at the Paramount theater in New York City, the first time any one performer had stayed so long since Rudy Vallee was the nation’s vagabond lover, and that was ‘way back in ’29.
Before this engagement, he had been widely known as a featured vocalist with Tommy Dorsey’s orchestra –one of his records, “This Love of Mine,” has topped 1,000,000 in sales; another, “I’ll Never Smile Again,” is above the 750,000 mark—but there was nothing like the present burgeoning bud of popularity.
Yet people behind the scenes thought they detected the beginning of a new fad. And they nodded sagely in agreement when Sinatra decided to leave the band and try his luck alone. They saw in the boy’s vocal style—which is way over on the sweet side—a symbol of the growing trend toward sentimental and wistful singing, along with the waltzes, flowing capes and candlelight that seem always to flourish in a world at war.

Women Deluge Frank With Fan Mail
It has been that Frank Sinatra is completely untrained. Perhaps he can’t read music. But he has received invaluable advice on showmanship from such friends as his Norwegian arranger, Axel Stordahl. And he has taken the matter of physical training more seriously than many an opera singer. Using a small range, Frank’s style is reminiscent of Crosby, without the “b-b-b-boos.”
Frank blithely admits the influence of Crosby but explains in his confident, likable way, that he never stops to breathe where the average singer pauses. Instead he goes on until he gets to the end of the lyric, thereby completing its meaning. Then he ties the phrases together with moans. Sounds simple, but it looks as though it would be worth at least $200,000 to the young Italian American this year. That would be his income from singing at present rates in a big New York night club; from making a musical for RKO Radio pictures at $25,000; from radio and from theatrical appearances, and there is no telling how much from records when the Petrillo ban is lifted!
When blond Frankie, wearing extra wide trousers, a longer than usual coat and a slightly apologetic stoop, walks into the spotlight at the Riobamba club, feminine sights float to the roof. And you can feel the men bracing themselves to take it like gentlemen, or turning to signal waiters for “another Scotch.”
Most of the puckish faced fellow’s mail is the impassioned, boldly underlined output of high school girls who, too young for night clubs, have heard him on radio’s “Hit Parade.” They write begging letters, letters comparing him to Crosby and other heroes. “I know you’re married but” letters. They tell of spending days looking for a record of “The Song Is You,” insist he’s the only singer in the juke box repertoire to whom the boys and girls at their bowling alley will stop to listen.

A Bowes Amateur Graduate Is He
Not only the singer himself, but newspaper columnists, are being deluged with Sinatra mail. Occasionally an irate male puts in his 2 cents worth, says “Sinatra reminds me of Donald Duck imitating Crosby.” But Frank, who grew up in a back alley gang of a tough seaport town, can take that, too.
In high school Frankie got the idea of acting as agent for small orchestras, signing them for parties. He was farsighted enough to write himself into the contract as soloist. When his father got him a job on the Jersey Journal as office boy, he gave this up. He worked hard, doing a little of everything until he earned his “by” line as a sports reporter.
Then he took his girl (he had become interested in Nancy Barbati because of all the girls in their crowd, she was the only one who seemed unimpressed with his ukulele playing) to hear Bing Crosby sing one night. The next day—with only a dream for lunch – he gave up his typewriter at the Jersey Journal. Soon afterward he went on the road with a Maj. Bowes amateur unit. He is one of Bowers most successful graduates.
But that trip soon ended. Frank’s first steady job in the entertainment world was as waiter and master of ceremonies at a New Jersey roadhouse. To get singing practice, he went on five local radio stations—for which he received 70c a week carfare.
On Feb. 4, 1939, Nancy and Frank were married, had a three day honeymoon and Frank went to sing with Harry James. In less than six months he left to go with Tommy Dorsey and from then on the money rolled in. he was making $250 a week when he left Dorsey.

Sweet Music Makes Our Singer Cry
With enthusiasm uncorroded by experience, Frank and Nancy bought themselves a house in Hasbrouck Heights, New Jersey. It has a sort of Dutch colonial entrance, a Cape Cod bay window. There’s to be a tennis court in the back, a tricky movie projector hidden in the sun porch wall, and a loud-speaker tucked away in the fireplace. The Sinatras have a daughter, Nancy Sandra, 2 ½.
He seems more appreciative than surprised at his sensational luck. He explains, “I wouldn’t want to give anyone the idea that I haven’t worked at this racket.”
*   *   *
Virginia Irwin of the St. Louis Post Dispatch came away with a few more impressions after interviewing the singing phenom. She writes:
“Five feet 11 inches tall. Frank weights around 140 pounds, has blue eyes and brown hair. . . . He hates evening clothes, loves sports clothes and is not particularly handsome. He is terrifically sentimental and music often makes him cry.
“‘Particularly the sweeping string passages,’ he says. ‘I remember one particularly embarrassing experience with my inability to hold back the tears. It was at a concert of the Los Angeles Philharmonic. I got there late and couldn’t be seated until intermission. So I sat on the floor in the aisle. Just before intermission the orchestra played Ravel’s “Daphnis and Chloe” and when the lights went up for intermission, there I was, sitting on the floor, with the tears running down my cheeks. People looked at me as though I were something escaped from an asylum.”

<Boyish is the word for FrankSinatra. His voice means romance on the radio.