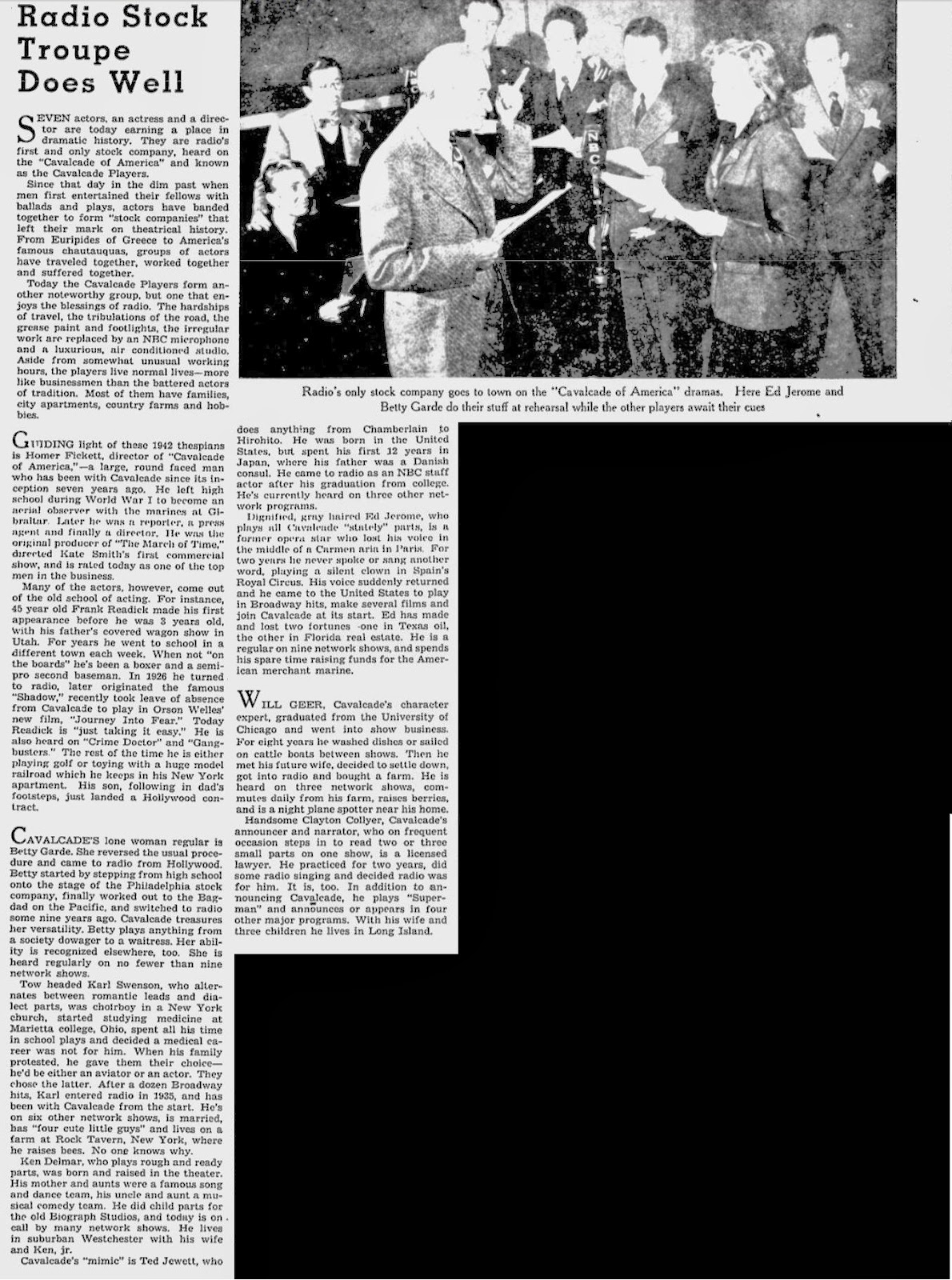 SEVEN actors, an actress and a director are today earning a place in dramatic history. They are radio’s first and only stock company, heard on the Cavalcade of America” and known as the Cavalcade Players.
Since that day in the dim past when men first entertained their fellows with ballads and play, actors have banded together to form “stock companies” that left their mark on theatrical history.
From Euripides of Greece to America’s famous chautauquas, groups of actors have traveled together, worked together and suffered together.
Today the Cavalcade Players form another noteworthy of radio. The hardships of travel, the tribulations of the road, the grease paint and footlights, the irregular work are replaced by an NBC microphone and a luxurious, air conditioned studio. Aside from somewhat unusual working hours, the players live normal lives—more like businessmen then the battered actors of tradition. Most of them have families, city apartments, country farms and hobbies.
<Radio’s only stock company goes to town on the “Cavalcade of America” drama. Here Ed Jerome and Betty Grade do their stuff at rehearsal while the other players await their cues>
GUIDING light of these 1942 thespians is Homer Fickett, director of “Cavalcade of America,”—a large, round faced man who has been with Cavalcade since its inception seven years ago. He left high school during World War I to become an aerial observer with marines at Gibraltar. Later he was a reporter, a press agent and finally a director. He was the original producer of “The March of Time,” directed Kate Smith’s first commercial show, and is rated today as one of the top men in the business.
Many of actors, however, come out of the old school of acting. For instance, 45 year old Frank Readick made his first appearance before he was 3 years old, with his father’s covered wagon show in Utah. For years he went to school in a different town each week. When not “on the boards” he’s been a boxer and a semipro second baseman. In 1926 he turned to radio, later originated the famous “Shadow,” recently took leave of absence from Cavalcade to play in Orson Welles’ new film, “Journey Into Fear.” Today Readick is “just taking it easy.” He is also heard on “Crime Doctor” and “Gangbuster.”  The rest of the time he is either playing golf or toying with a huge model railroad which he keeps in his New York apartment. His son, following in dad’s footsteps, just landed a Hollywood contract.
CAVALCADE’S lone woman regular is Betty Garde. She reversed the usual procedure and came to radio from Hollywood. Betty started by stepping from high school onto the stage of the Philadelphia stock company, finally worked out to the Bagdad on the Pacific, and switched to radio some nine years ago. Cavalcade treasures her versatility. Betty plays anything from a society dowager to a waitress. Her ability is recognized elsewhere, too. She is heard regularly on no fewer than nine network shows.
Tow headed Karl Swenson, who alternates between romantic leads and dialect parts, was choirboy in a New York church, started studying medicine at Marietta college, Ohio, spent all his time in school plays and decided a medical career was not for him. When his family protested, he gave them their choice—he’d be either an aviator or an actor. They chose the latter. After a dozen Broadway hits, Karl entered radio in 1935, and has been with Cavalcade from the start. He’s on six other network shows, is married, has “four cute little guys” and lives on a farm at Rock Tavern, New York, where he raises bees. No one knows why.
Ken Delmar, who plays rough and ready parts, was born and raised in the theater. His mother and aunts were a famous song and dance team, his uncle and aunt a musical comedy team. He did child parts for the old Biograph Studios, and today is on call by many network shows. He lives in suburban Westchester with his wife and Ken, jr.
Cavalcade’s “mimic” is Ted Jewett, who does anything from Chamberlain to Hirohito. He was born in the United States, but spent his first 12 years in Japan, where his father was a Danish consul. He came to radio as an NBC staff actor after his graduation from college. He’s currently heard on three other network programs.
Dignified, gray haired Ed Jerome, who plays all Cavalcade “stately” parts, is a former opera star who lost his voice in the middle of a Carmen aria in Paris. For two years he never spoke or sang another word, playing a silent clown in Spain’s Royal Circus. His voice suddenly returned and he came to the United State to play in Broadway hits, make several films and join Cavalcade at its start. Ed has made and lost two fortunes—one in Texas oil, the other in Florida real estate. He is a regular on nine network shows, and spends his spare time raising funds for the American merchant marine.
WILL GEER, Cavalcade’s character expert, graduated from the University of Chicago and went into show business. For eight years he washed dishes or sailed on cattle boats between shows. Then he met his future wife, decided to settle down, got into radio and bought a farm. He is heard on three network shows, commutes daily from his farm, raises berries, and is a night plane spotter near his home.
Handsome Clayton Collyer, Cavalcade’s announcer and narrator, who on frequent occasion steps in to read two or three small parts on one show, is a licensed lawyer. He practiced for two year, did some radio singing and decided radio was for him. It is, too. In addition to announcing Cavalcade, he plays “Superman” and announces or appears in four other major programs. With his wife and three children he lives in Long Island.