Mad Russian on Eddie Cantor Program: "What Gets Russian So Mad?" 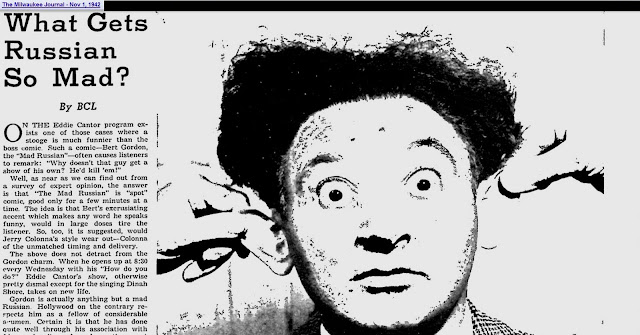 What Gets Russian So Mad?
By BCL

ON THE Eddie Cantor program exists one of those cases where a stooge is a much funnier than the boss comic. Such a comic—Bert Gordon, the “Mad Russian”—often causes listeners to remark: “Why doesn’t  that guy get a show of his own? He’d  kill ‘em!”
Well, as near as we can find out from a survey of expert opinion, the answer is that “The Mad Russian” is “spot” comic, good only for a few minutes at a time. The idea is that Bert’s excruciating accent which makes any word he speaks funny, would in large doses tire the listener. So, too, it is suggested, would Jerry Colonna’s style wear out—Colonna of the unmatched timing and delivery.
The above does not detract from the Gordon charm. When he opens up at 8:30 every Wednesday with his “How do you do?” Eddie Cantor’s show, otherwise pretty dismal except for the singing Dinah Shore, takes on new life.
Gordon is actually anything but a mad Russian Hollywood on the contrary respects him as a fellow of considerable acumen. Certain it is that he has done quite well through his association with quite well through his association with films and radio, and ones hopes the recent rumors, to the effect that he and “Haddie Camphor” are at the friendship’s end, will be disproved. Gordon shouldn’t do without Cantor and Cantor shouldn’t do without Gordon.
The “Mad Russian” was born in New York some time around the turn of the century. His formal “l’arning” was limited indeed; it ended when Bert was still in graded school. His stage experience began when he was only 7 years old, and was augmented in Jewish plays in a New York Bowery theater.
THIS was the heyday of vaudeville, and in the years before 1920 Bert trod the boards in many a town. Among others, he performed in his teens with Jack Benny, Phil Baker, Ben Bernie and Lou Holtz. In 1921 he was in a George White “Seandals” production as a featured comedian. Later he teamed up with Gene Ford, and in the late twenties was busy in the Gershwin musical comedy “Girl Crazy.”
Then vaudeville died, and Bert went into business, but not show business. He stayed out awhile, and then got interested in the burgeoning field of radio. After a few guest appearances, he got himself spotted in an Eddie Cantor show some years ago when Cantor show some years ago when Cantor was at the top of the radio list. Bert flitted in and out of radio and the movies until about 1936, when he became a fixture with Cantor.

<Speaking of stooges, who makes a better picture than Bert Gordon, the “Mad Russian” of Eddie Cantor’s NBC show, who is shown above with his ears in full sail? In the picture below is Cliff (Sharlie) Hall (right), now doing a comeback as straight man for Jack (The Baron) Pearl>