Radio and Television in Review 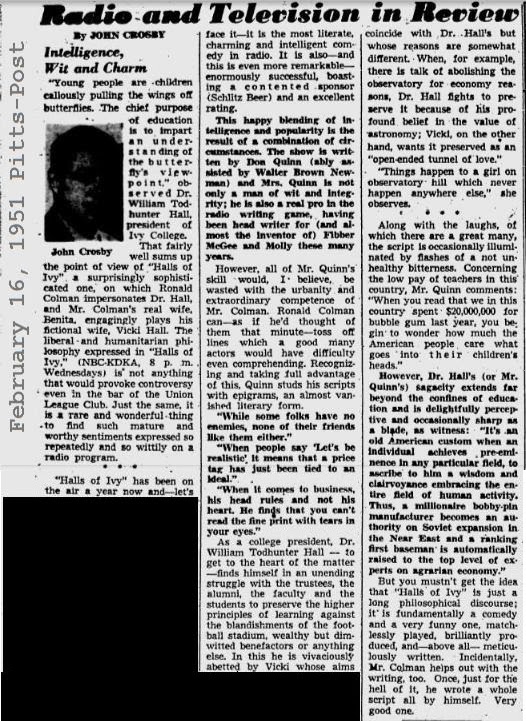 Radio and Television in Review: Intelligence, Wit and Charm
By JOHN CROSBY

“Young people are children callously pulling the wings off butterflies. The chief purpose of education is to impart an understanding of the butterfly’s viewpoint ,” observed Dr. William Todhunter Hall, president of Ivy College.

That fairly well sums up the point of view of “Halls of Ivy” a surprisingly sophisticated one, on which RonaldColman impersonates Dr. Hall, and Mr. Colman’s real wife, Benita, engagingly plays his liberal and humanitarian philosophy expressed in “Halls of Ivy,” (NBC-KDKA, 8 p. m. Wednesday) is not anything that would provoke controversy even in the bar of the Union League Club. Just the same, it is a rare and wonderful thing to find such mature and worthy sentiments expressed so repeatedly and so wittly on a radio program.

“Halls of Ivy” has been on the air a year now and—let’s face it—it is the most literate charming and intelligent comedy in radio. It is also—and this is even more remarkable—enormously successful, boasting a contented sponsor (Schlitz Beer) and an excellent rating.

This happy blending of intelligence and popularity is the result of a combination of circumstances. The show is written by Don Quinn is not only man of wit and integrity; he is also a real pro in the radio writing game, having been head writer for (and almost the inventor of) Fibber McGee and Molly these many years.

However, all of Mr. Quinn’s skill would I believe, be wasted with the urbanity and extraordinary competence of Mr. Colman, Ronald Colman can –as if he’d thought of them that minute—toss off lines which a good many actors would have difficulty even comprehending. Recognizing and taking full advantage of this, Quinn studs his scripts with epigrams, an almost vanished literary form.
“While some folks have no enemies, none of their friends like them either.”

“When people say ‘Let’s be realistic.’ It means that a price tag has just been tied to an ideal.”
“When it comes to business, his head rules and not his heart. He finds that you can’t read the fine print with tears in your eyes.”

As a college president, Dr. William Todhunter Hall—to get to the heart of the matter—finds himself in  an unending  struggle with the trustees, the alumnl, the faculty and the students to preserve the higher principles of learning against the blandishments of the football stadium, wealthy but dimwitted benefactors or anything else. In this he is vivaciously abetted by Vicki whose aims coincide with Dr. Hall’s but whose reasons are somewhat different. When, for example, there is talk of abolishing the observatory for economy reasons, Dr. Hall fights to preserve it because of his profound belief in the value of astronomy; Vicki, on the other hand, wants it preserved as an “open-ended tunnel of love.”
“Things happen to a girl on observatory hill which never happen anywhere else,” she observes.
*     *     *
Along with the laughs, of which there are a great many, the script is occasionally illuminated by flashes of a not unhealthy bitterness. Concerning the low pay of teachers in this country, Mr. Quinn comments: “When you read that we in this country spent $20,000,000 for bubble gum last year, you begin to wonder how much the American people care what goes into their children’s heads.”
However, Dr. Hall’s (or Mr. Quinn’s) sagacity extends far beyond the confines of education and is delightfully perceptive and occasionally sharp as a blade, as witness: “It’s an old American custom when an individual achieves pre-eminence in any particular field, to ascribe to him a wisdom and clairvoyance embracing the entire field of human activity. Thus a millionaire bobby-pin manufacturer becomes an authority on Soviet expansion in the near East and a ranking first baseman is automatically raised to the top level of experts on agrarian economy.”

But you mustn’t get the idea that “Halls of Ivy” is just a long philosophical discourse; it is fundamentally a comedy and a very funny one, matchlessly played, brilliantly produced, and—above all—meticulously written. Incidentally, Mr. Colman helps out with the writing, too. Once, just for the hell of it, he wrote a whole script all by himself. Very good one. 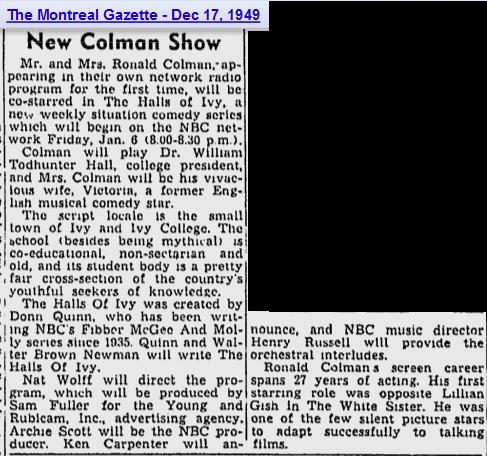 Mr. and Mrs. Ronald Colman, appearing in their own network radio program for the first time, will be co-starred in The Halls of Ivy, a new weekly situation comedy series which will begin on the NBC network Friday, Jan. 6 (8:00-8:30 p. m.).

The script locale is the small town of Ivy and Ivy College. The school (besides being mythical) is co-educational, non-sectarian and old, and its student body is a pretty fair cross-section of the country’s youthful seekers of knowledge.

The Halls Of Ivy was created by Donn Quinn, who has been writing NBC’s Fibber McGee And Molly series since 1935. Quinn and Walter Brown Newman will write The Halls Of Ivy.
Nat Wolff will direct the program, which will be produced by Sam Fuller for the Young and Rublcam, Inc., advertising agency. Archie Scott will be the NBC producer. Ken Carpenter will announce, and NBC music director Henry Russell will provide the orchestral interludes.

Ronald Colman’s screen career spans 27 years of acting. His first starring role was opposite Lillian Gish In The White Sister. He was one of the few silent picture stars to adapt successfully to talking films. 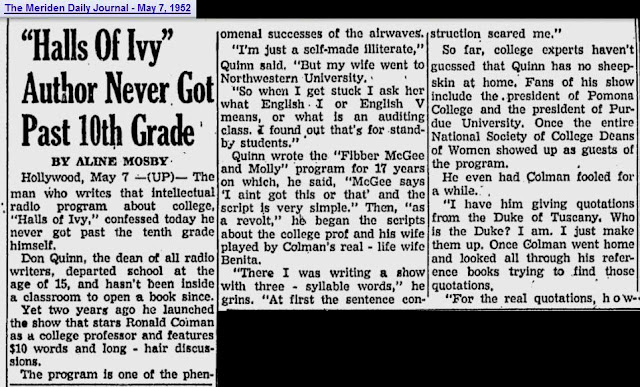 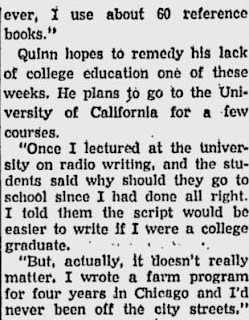 Hollywood, May 7 –(UP)– The man who writes that intellectual radio program about college, “Halls of Ivy,” confessed today he never got past the tenth grade himself.

Don Quinn, the dean of all radio writers, departed school at the age of 15, and hasn’t been inside a classroom to open a book since.

Yet two years ago he launched the show that stars Ronald Colman as a college professor and features $10 words and long – hair discussions.

The program is one of the phenomenal successes of the airwaves.

“I’m just a self-made illiterate,” Quinn said. “But my wife went to Northwestern University.
“So when I get stuck I ask her what English I or English V means, or what is an auditing class. I found out that’s for standing by students.”

Quinn wrote the “Fibber McGee andMolly” program for 17 years on which, he said, “McGee says ‘I aint got this or that’ and the script is very simple.” Then, “as a revolt,” he began the scripts about the college prof and his wife played by Colman’s real-life wife Benita.

“There I was writing a show with three—syllable words,” he grins. “At first the sentence construction scared me.”

So far, college experts haven’t guessed that Quinn has no sheepskin at home. Fans of his show include the president of Pomona College and the president of Purdue University. Once the entire National Society of College Deans of Women showed up as guests of the program.

He even had Colman fooled for a while.

“I have him giving quotations from the Duke of Tuscany. Who is the Duke? I am, I just make them up. Once Colman went home and looked all through his reference books trying to find those quotations.

“or the real quotations, however, I use about 60 reference books.”

Quinn hopes to remedy his lack of college education one of these weeks. He plans to go to the University of California for a few courses.

“Once I lectured at the university on radio writing, and the students said why should they go to school since I had done all right. I told them the script would be easier to write if I were a college graduate.”
“But, actually, it doesn’t really matter. I wrote a farm program for four years in Chicago and I’d never been off the city streets.”

By Jon April 06, 2012
While doing research for an article I came across an unexpected search result: "Was Jack Benny Gay?" There was no more than the question as previously stated from the original poster, but the replies made for interesting reading, ranging from: Jack Benny Celebrating his 39th Birthday "Of course not, he was a well known skirt-chaser in his youth, and he was married to Mary Livingston for many years" "Sure he was, everyone in Hollywood with the possible exception of John Wayne was and is homosexual!" "Part of Benny's "schtick" was his limp-wristed hand-to-face gestures. He was not gay, but emphasized what his fans observed as "acting like a girl" for humor. While heterosexual Benny tried to gay it up, many really gay actors or comedians in those days tried to act as "straight" as they could muster." "... the idea behind his character was to have him a little on the ambiguous side. His charact
35 comments
Read more